In the late 70s, early 80s the Kitchen on Broome Street in NYC was an exiting hub of avant-garde art – video, music, dance, performance, visual art, and film – a center for experimentation, a center for young emerging artists and masters. It still is that hub today.

I was the curator for the performance & film series, and the gallery at the Kitchen.

Laurie Anderson, a well-known and respected performance artist and musician, had not performed at the Kitchen in a few years. She and I met and together decided it would be good to present her new work in a larger, different venue than the Kitchen, to play with context.

So Laurie and I went around New York City looking at lots of spaces – from the Brooklyn Academy of Music to the American Place Theater to the nightclub, Pravda… We decided to four-wall the performance at the Orpheum Theater on Second Avenue. It had just been purchased by these young guys and transformed from a place that showed X-rated films into a classic old theater. Laurie’s gallery owner, Holly Solomon, helped with the rental costs.

The owners of the Orpheum didn’t know who Laurie was, but they were game to work with us, even allowing us to cut a hole in one of the walls so that Laurie and Perry Hoberman could project film, whose images would fill the entire stage and the enormous screen that we built.

Laurie premiered “United States Part II,” which included the song, “O Superman.”  I was the producer.

We sold out before we opened. The performances were riveting and powerful. The reviews were fantastic. I got to negotiate the extended run. 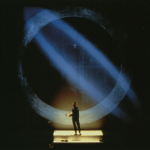 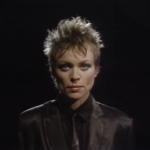